Traveling through 16 cities in Spain and Portugal in 30 days could get confusing from time to time, which is why I have set up this blog to document this summer's trip and hopefully maintain some sort of sense of place. Following a month sketching and photographing throughout Spain and Portugal, I'll be spending an additional three weeks in Barcelona where I will be participating in an international design workshop at the School of Architecture in Barcelona. This workshop allows students and professors from around the world to work together to tackle a design charette that centers on the urban scale. For more information on the trip or workshop in Barcelona, check out the trip's website.

In preparation for the trip, the ten other students from IIT and I were asked to research some of the buildings we will be seeing while abroad as well as to prepare an in depth study of the cities we will be visiting. Below are the descriptions I wrote of the buildings I was assigned, unfortunately one of them we will not be visiting as it is only accessible by car, but it is still interesting nonetheless. 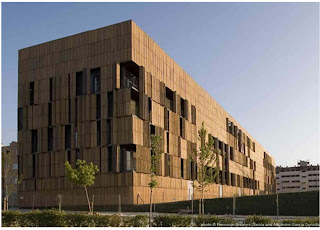 FOA’s Carabanchel Housing is one of a series of new public housing projects in a new development in southern Madrid in which regulation sets the number and type of units, sizes of certain areas, and heights, however, the design is left at the hands of many well-known architects. FOA’s particular approach to this challenge involved creating units that could be manipulated individually and yet contribute to a building that reads as a whole. The building is situated on a parallelogram-shaped plot, running along a north-south axis, giving each unit access to both the east and west sides of the building on which runs a wide terrace that is protected from the intense summer sun by a series of sliding bamboo screen panels. These panels give the building a uniform cladding, while still allowing the owner of the units to maneuver them to their preferences, giving the owners a sense of personal identification with their unit.

The parking complex is sunk below ground, allowing for green space to be added on either side of the building, which contrasts with the building facade and adds a touch of color. Overall the project does well to lower costs, stay sustainable and provide spacious and flexible living spaces for its residents. 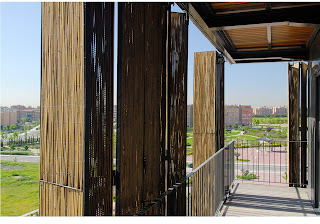 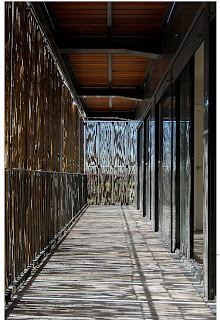 Currently accessible by car only 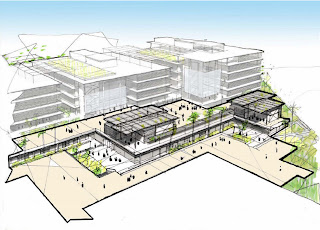 Abengoa’s new campus rethinks the way a business park functions both socially and practically. Abengoa, an international technology company with a focus on sustainability, applies much of its sustainability knowledge to its new campus, in everything from the orientation of the campus to the selection of materials. The design of the individual buildings and their arrangement on the site maximizes self-shading and photovoltaic panels, hydrogen batteries, and a tri-generation plant are just a few of the sustainable additions to the campus. Everything is suited to protect from and harness the energy provided by the intense summer conditions in the south of Spain. All of these sustainable functions earned the campus the LEED Platinum award.

The colors in the buildings are a nod to the glazed tiles traditionally found in the Andalucia region and the layers of screens and glass on the facade work to maximize light while reducing glare and heat. 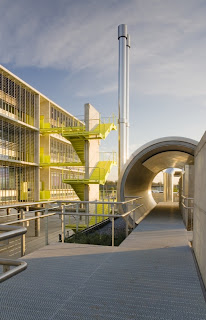 Abengoa’s other goal with this new campus is to maximize communication and interaction across the many divisions within the company. A large central space unifies the seven buildings, however level changes and the offset arrangement of the buildings allow a unique sequence of spaces to develop. The nature of these spaces also allow them to be occupied year round and the organization of the spaces reduce the heat load on campus, avoiding heat islands, which would be particularly intense during the summer. The campus also includes many social services for its employees, making more of a small, contained city than a business park.