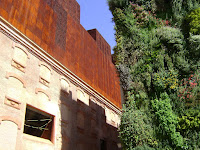 Today's class started off with a bang. A lot of walking and a lot of city to see. We started at Circulo de Bellas Artes, where we talked about the city, and the class over a cup of cafe con leche. We then headed to our first spot, Caxa Forum, a renovated building that used to house electricity generators that is now an art museum. The renovation was done by Herzog and De Meuron, who are famous for their obscure facade treatments, and they didn't disappoint. Their new treatment is a rusted perforated metal facade that contrasts greatly to the original brick building and the green wall next to the museum. The building itself almost floats on the site, cantilevering over three majors supports, creating a very compressed space under which the floor and ceiling planes 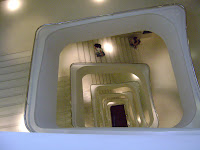 undulate. The stair that unites the floors within the building, is a great trompe l'oeil with slightly slanted walls and lighting highlighting different parts of the stair. The experiment in facade treatments continues in the auditorium with another type of perforated metal and wood floors that warp and curl creating seating areas, etc. And that's not even getting to the exhibits, one of which was very textural, by Miquel Barcelo, similar to the building facade treatments. Our first assignment was also at Caxa Forum, we had to draw a section and plan of the building from the outside, learning how to draw and better understand what we see.
Next on our list was the Reina Sofia, a hospital that was converted into an art museum with an addition by Jean Nouvel. The addition does almost the opposite of the Herzog and De Meuron building, no 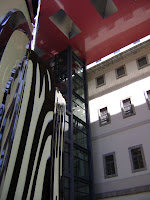 t even touching the existing building and almost turning its back to the street, creating an interior public courtyard. A large cantilevered roof unites the whole thing and reflects images of the street, making you always aware of the city just on the other side. The most amazing part of the building however, comes with the stepped plazas accessible by the public, giving amazing views of the city. Here we were to go see Picasso's Guernica and try to analyse the different layers of the painting.
The second half of the class, called city walks involves walking around the city and understanding how the urban fabric evolved. Madrid has an old and new city, that are distinctly different in how dense and how they a 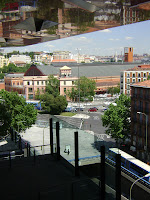 re planned. Finishing the day with spanish choizo or sausage on fresh bread and a beer, on a cobble stoned plaza made for the perfect ending. We walked all across the city and by the end of the day were exhausted but content with the massive amounts of architecture and the city we saw. Can't wait to see what tomorrow holds...
Posted by Angela at 4:06 PM