Our first day trip was to Igualada, where we visited a cemetery tucked away among industrial warehouses on the cliff of a large gorge. It was a very different style of cemetery with rows of tombs set into the cliff-side. Here was truely a place where people could visit their loved ones in a peaceful setting. On our return to Barcelona that day, we visited a public library that also included outdoor public space behind it. The library itself was really nice-I could see myself bringing work there, plus it was right next door to an excellent coffeeshop.
Our next day trip wa 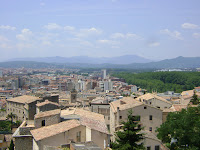 s to Granada where the purpose was less to see specific architecture than to wander around the small town. A long medieval wall runs along the top of a large hill overlooking the town and the mountains behind it and from there we could watch planes flying in and lightning striking the mountain tops.
Our last day in Barcelona we visited the Jean Nouvel shopping center which is very well integrated into the city fabric and looks a lot like a skyscraper turned on its side with its many setbacks along the street. From there we visited the School of Architecture at the university where those of us staying for the workshop in Barcelona will be spending two weeks. Also there was a fantastic architecture libra 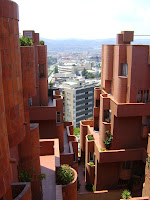 ry and bookstore-both great places to spend lots of time, as I'm sure I will.
Lastly, we went to an apartment complex that really redefines living in an apartment building, for each apartment has either windows or patios both looking inward towards the interior courtyards and outwards at the city. The corridors leading to the apartments are such that you are forced to meet your neighbors and 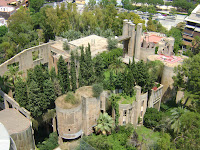 interact with both the people around you and the city. The whole complex acts as its own small neighborhood with movie screenings and outdoor pools on the roof. The architect's offices were right next door in these fantastic converted silos that looked like something out of jurassic park.
We were supposed to take the funicular up to the top of Tibidabo, the highest point in the city, but did not have time. (I did make it up there the next day and the views were ama 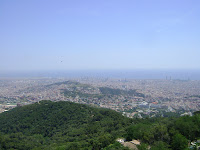 zing as you can see...)
That night we all went out to an excellent tapas dinner together where we presented our professors (who love maps) with a map of Spain/Portugal on which we had written and drawn all the random and hilarious thing that had happened in each city. It was a great night for reminiscing on all that had happend on our month across Spain and Portugal.
Posted by Angela at 4:39 PM