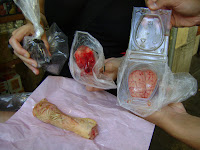 We started the day visiting a couple of Barcelona's famous outdoor markets where every variety of fruit, vegetable, and meat is sold. We had a fairly curious task here-to find the strangest thing we could buy for under one euro. We found some pretty strange things including chicken heads, rabbit heads and even some animal's brain that came in its very own brain box. If you weren't grossed out enough, here's a picture...
Aside from these oddities, the markets had so much that was delicious including lots of fresh and dried fruit-even dried kiwis and raspberries which i had to try, naturally.
We also paid a visit to the Barcelona Center for Architecture, which had an exhibit on state financed buildings as well as a fantastic architecture bookstore-always dangerous. Continuing our walk around the old city, we came upon an old Catalan tradition of fire running in which kids get to dress up like devils and run around with a firecracker on a pitchfork. Even the littlest kids were allowed to participate and didn't seem the least bit scared. I did creepily take a video of one of them...
After lunch, we walked to see Nouvel's iconic skyscraper that is as of now the tallest building on the Barcelona skyline and lights up in an array of colors at night. We continued down Diagonal street, so called because it moves diagonally through the city grid, go figure, and stopped at a park by Nouvel and one by Miralles both of which play with ways to make surfaces or planes that divide up the park. One even had the planters hanging as if they were the tree canopy.
We ended the day at a bar watching the disappointing results of the U.S. versus Ghana game. Oh well, maybe next time...
The next day we met at Plaza Espana and deaded to Mies mecca-the Barcelona Pavillion. Created for the -29 World's Expo, the Pavillion is a temporary structure that was rebuilt in the 80's and consists of a series of planes that seem to just float, as if they were in movement and were just ca 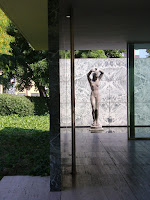 ptured for a moment in this position. The richness of the materials also make the pavillion somewhat of a jewel-different types of marble, pristine glass and, of course, travertine floors.
Right across the street was the Barcelona Cixa Forum housd in a converted warhouse. The roof of the building reminded me of the roof of Case Mila-with a series of interconnected walkways/roof surfaces, creating a small city on top of the city. There we found a plyaful photography exhibition by Jacques Lartigue of people mid-jump, in flight, and included a series of 3D imges.
We broke for lunch at the top of Montjuif which had fantastic view 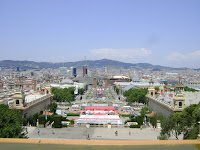 s of the city and then continued up the mountain to the Botanical Gardens and site of the '92 Olympics. The Gardens were very pretty with plants from all over the world and, again, excellent views of the city. After taking the funicular down the mountain, we found another to climb-we were headed for Parc Gruell, the parc designed by Gaudi. This park was massive and had so much Gaudi in it, it could have almost been a Gaudi amusement park.
We ended the day in the Gracia neighborhood home to actual locals and a Lebanese bar/restaurant where Argentina was overwhelmingly favored to win in their game against Mexico, which they did.
Posted by Angela at 1:43 PM