Our first evening in Barcelona we spent walking along the sea, seeing the old '92 olympic village and the more touristy areas of the city. We did see a couple of interesting architectural ieces like a small building by Siza and a hotel by SOM from Chicago where the structure was completely exposed on the outside. We ended the night with a delicious Paella meal on a small street in Pueblo Nou, a fairly up-and-coming neighborhood.
The next day was a big Gaudi day where we saw La Pedrera (an appartment buil 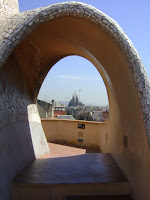 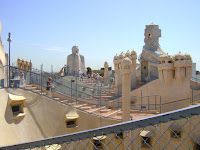 g on the Michigan Avenue of Barcelona) and of course La Sagrada Famillia. La Pedrera had a fantastic roof landscape that was almost a small city unto itself, providing amazing views to the sea, mountains and city tucked in between them. At Sagrada Famillia, we got true VIP treatment by the head architect working on the project. We got a full tour of the work in progress, which is a pretty spectacular church composed of many geometrical forms like parabola 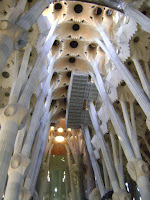 s and hyperbolas-taking yo back to calculus much? So, while the forms look pretty organic, theres actually a complex series of mathematical forms behind every move, which really appealed to the math nerd in me. The architect took us up to the very top scaffolding to oversee the work as well as the entire city although unfortunately we could not take pictures up there.
We also got to truely settle into our new appartment, buying food, unpacking, etc. The appt., er...apt., is really nice with giant windows and small balcony off the bedrooms, over-looking the street. So far, Barcelona looks like a very liveable city.
Posted by Angela at 3:12 PM