Two Ends of the Spectrum 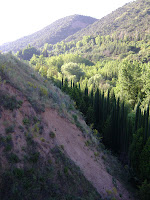 Today started early with one of the most amazing bike rides I have ever been on. Picking up bikes from our hostel for 2 euro, Collin and I set out to see more of Granada...on two wheels. Biking along the river, we took a road that would its way through quaint neighborhoods and eventually ended in a dirt road that required a short hike to one of the most breathtaking views. Mountains wove in and out creating the valley through which the river runs and just in the distance, below the Alhambra, you could make out Granada, nestled just beyond the crook of those two overlapping mountains. We had seen so much and class hadn't even started.
Today's building studies gave two very different ideas of architecture. The first, Parque de los Ciencias by Carlos Ferrater was a science museum made 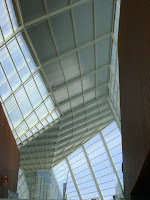 up of a haphazard, almost arbitrary series of corridors, while the second, Museo Caja Granada by Alberto Camps Baeza was an austere, forbidding looking museum housing the history of Andalucia. Neither is perfect. The first is playful in its layout and the light streaming in from all sides, however it is very obvious in its intentions and the underlying ideas are somewhat underdevelo 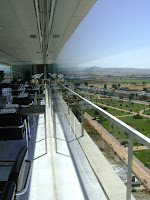 ped. The hallways funnel people toward giant glass walls that don't really provide views of anything in particular and don't lead to any real interesting spaces. The second museum's palate on the other hand if fairly unwelcoming although the restaurant on a higher floor seems to float above the city. At the center of the museum is an ovular pavillion in a pristine white (blinding in the intense Granada sun) that seems more like a sculptural void than a working pavillion. It even looks like a rendering in how surreal it appears. Overall, while both are studies in using geometry, neither use it to its best effect. Lastly, we rode to the top of the observation deck (covered in giant ants for whatever reas 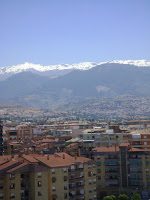 on) in the science museum, givng panoramic views of the city.
I'm sorry to be leaving Granada-with its mix of Spanish and Moorish influence, it is by far my favorite place we've visited so far.
Posted by Angela at 4:00 PM