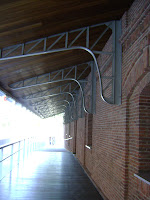 Today's class started at the Madrid Archives, a converted beer brewery done by Mancia Antonio. Divided in two as buildings for books and buildings for people, Antonio found ways to merge the needs of an archive with the existing conditions left by a brewery. Just as an example, the large silos became a storage room for documents requiring little to no light. The architect was also good at making everything very organized-color coordinating the floors and stayed true to the Madrid tradition of using small pieces of wood in concrete formwork. Ironically enough, the architect then painted any wood cladding white-creating a play on textures-the concrete expressing the wood that formed it, the wood imitating the concrete expressing the very properties is posesses. 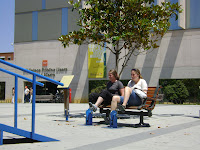 Our next stop was the Biblioteca Publica Usera, a public library by Josi Hierro. Here we had an excercise to draw sections of the library which did some interesting things-each floor of the buplic library had at least one half floor. The elevateor united the public floors and was entirely glasss, making for a fun ride to the top. Outside, Wissman and I found some pretty fun (and easy) excercise bikes. 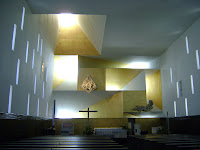 We next visited a church out in the suburb of Madrid, a suburb that actually looked a lot like a suburb of California. Here, light passes through a series of angled skylights, creating an amazing effect of light on the interior.
Last was the Piscina Municipale by Alberto Nicolau, a public swimming pool whose facade is quite literally in the form of waves, somewhat of an example of duck architecture. The main entrance had high ceilings and a bubblewall so called for its bubble pattern.
Posted by Angela at 1:58 PM