Today was dedicated almost entirely to the Alhambra in Granada. The large palace along with separate prince's quarters and sprawling gardens sit atop a large hill/mountain overlooking the rest of Granada. Here we were to study the sequence of spaces in both the gardens an 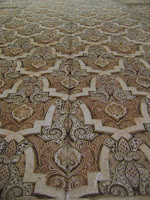 d main palace.
The gardens were fairly formally laid out with axes and several different kinds of hedges, trees, etc. to divide up the space, creating room-like spaces within the garden.
Next we visited the main palace which was spectacular-probably one of my favorite things we've seen on this trip. Room after room was decorated wit 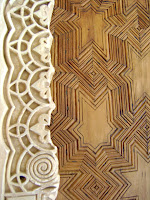 h these very three-dimensional tiles that often had Arabic incorporated into them-the text becoming decoration, the decoration becoming the text. The palace is also laid out like no other palace I've seen-its almost like a maze where the interior spaces aren't the final destination, but the outdoor courtyards are. There's a definite sense of dramaticism to the space-hallways give you a peak of the larger space lying just ahead but with no clue as to how to get there. After a series of twists and turns, your patience is rewarded and you are released into the space 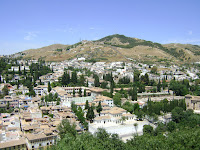 you have longed to see. The ultimate reward comes at the end when a tiered walkway gives spectacular views of all of Granada.
Posted by Angela at 3:32 PM