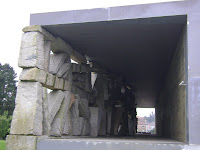 Santiago de Compostella, best known for its church of St. James to which thousands of pilgrimmages are made each year (some walking for months across Europe) is known as the third holiest of cities in the Catholic faith. Here we visited a center for literature and music-both done by the same architect. One of the buildings was made up of smooth polished stone, the other with an unruly facade of the same stone that creates a little promenade between it and the front facade made up of cd cases. Another center by Siza put us in high spirits just before they fell like a ton of bricks. High on a hill overlooking the small town of Santiago is a massive cultural center that has been in progress for almost 10 years. What makes the story of this building so depressing is the lack of enthusiasm. everyone, even the architect has for it. Its massive, so much so that the city can't even find enough program to fit in it and with Spain's economy constantly sinking into a state of massive disrepair, the money to fund the project is hard to come by. The deisng is such that there are several grid patterns overlaying the whole complex, leaving it hard to take in-overwhelming in its comple 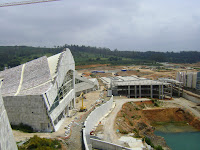 xity. It felt somewhat like a war zone that the city can't pull out of and so it looms on the top of Santiago's largest hill, unfinished for at least another five years. The disappointment continued with Spain's world cup game against the Swiss, which our groupd spent our lunch break watching. A fluke goal by the Swiss after the Spanish dominated the whole game (they had their issues finishing, its true), left a bar full of sad and disappointed faces. Ah well, there's still plenty of time to come back....once they figure out that finishing thing that is. Also, by special r 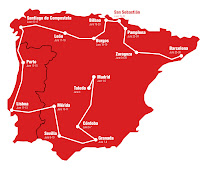 equest, heres a map of the places we are traveling/have traveled to, to give some context...sorry its late.
Posted by Angela at 3:08 PM