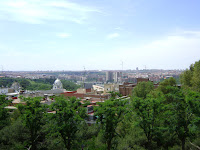 On our last evening in Madrid, we hit the town with our professors bidding to see the Madrid night life. We ate some delicious tapas, a couple glasses of wine, and talked into the night as the Spanish do. The next morning we had just enough time to take a stroll around some new neighborhoods in Madrid, stopping in a park where Egyptian ruins much like the Temple of Dendur in the Met were placed. The park had some great views of the city and a great spot in the grass for taking a quick siesta, where all of us passed out for an hour. I'll end with a reflection on the city.....

As a city, Madrid is very fast paced, especially for Spain, so much so that it reminded me in some ways of New York. However, it lacked a certain...something. Maybe it was a character that is unique to just Madrid-Madrid's main source of income is tourism, so it makes sense that it would cater to tourists, however, it makes the city seem fake and cold.
Madrid also seems to have over extended itself, in a rush to make itself the true capital of Spain, it spent massive amounts of money improving its public services, like the Metro whcih is one of the most efficient and extensive I've seen. However, since it was built recently, there is no sense of place connected to it, again cold. It could be a metro system anywhere, lacks the character seen in the Paris system for example. The one thing of character about it is the map, whose graphic design seems very Madrid, or very Spain anyways.
This overextension has left Madrid sprawling and seemingly stretched very thin-there aren't really geographical aspects shaping it, even the river doesn't seem to be a defining element of Madrid, which perhaps adds to the feeling that Madrid lacks that sense of uniqueness. There were some areas of Madrid that seemed to have their own character, untouched by the tourism drive, but they are few and far between. The one thing I found truely laudable about Madrid was its suburbs-all very reachable by Metro, all very walkable and bikeable even. In this way, America has a lot to learn from Madrid.
Posted by Angela at 2:26 PM