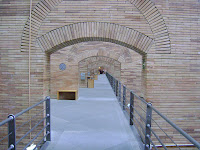 Arriving early evening in Merida, we quickly dropped our stuff and set out to explore the small town. I was drawn immediately to the riverside park which was simply landscaped but gave amazing views of the river, its many bridges and the mountains off in the distance. Not only that, but the entire town of Merida was out running, playing soccer, strolling, etc. in this park. It reminded me a lot of Riverside or Central Park in NY, only maybe a little less busy.
The next day we started class visiting the Migos Del Museo as well as many ancient Roman ruins, Merida having been a town started under the Roman Empire. Between the ruins and the Moorish mosaics on display in the museum, it was easy to forget we were in Spain.
Next stop, Portugal, where we arrived in Lisbon only to find out that very weekend was a local holiday celebrating one of the patron saints. And so, after an excellent dinner consisting of several varieties of very fresh fish (yes, mom and dad, you heard correctly, fish) we found ourselves in the midst of the equivalent of the entire city's party. Small winding streets were jam packed with people eating, 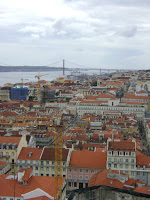 drinking, dancing and just living it up. Severla conga lines later, we were ready to call it a night, to save some energy for the real party, which was saturday night. (The Portuguese certainly known how to have a good time.)
Class the next day consisted of walking and seeing as much of Lisbon as possible. Built on the mouth of the river running straight into the Atlantic, Lisbon is very much a port town. It is also built on a series of very steep hills, so they need a set of trolley cars to transport people up the hills-much like the ones in San Francisco. The Portuguese themselves seemed to be a completely different breed from the Spanish-obsessed with a good meal of the freshest fish, their passion for food reminded me a little of the French...
We visited the remains of a fortress on one of the hills, providing views of the entire city, an elevator designed, perhaps, by Eiffel, Calatrava's train station, and the Expo from '98 when Siza did many clever, playful buildings. This Expo was a lot more successful than that in Seville-located at the outskirts of the city, it became its own small town within Lisbon. At 7:30 we all raced back to the bar at the hostel to see the U.S. vs. England world cup match, which ended fairly well for the U.S. in a 1-1 tie. We did get a stupid goal, but overall I think played better than England and deserved the tie. The atmosphere at the hostel was perfect- 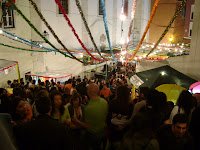 game projected huge on a wall and people from all over all watching the game, beer in hand. The enemy was sitting at the next table, but wore friendly enough.
After the game, it was time to hit the streets for one of the biggest parties in Lisbon and boy was it packed-people of all ages were out well into the night and everywhere you looked there was music blasting, people dancing, and fresh sardines being grilled and smoked. In addition to the smoked sardines, there were churros, sangria, port wine, and ganga-a cherry flavored liquor all available for sampling for 1 euro apiece. Needless to say, we were sory to leave Lisbon early the next morning.
Posted by Angela at 2:52 PM