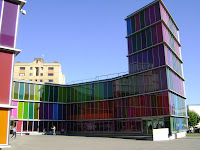 After Santiago, we had a series of cities in which we spent less than 24 hours in. The first was Leon where we visited the colorful Museo de Arte Contemporaire, which unfortunately we couldn't get into as they were between exhibitions. The colors on the main facade are warmer where the sun reaches the facade, cooler where it doesn't.
In Burgos, we saw the fantastic Burgos Cathedral, as well as a museum of contemporary art that looked over most of the city. While there we saw a very colorful wedding procession as well.
Bilbao was by far my favorite of the three. After losing its ship building industry to glabalization, Bilbao has really reinvented itself as a modern city-very attractive to tourists and its own residents as well. A lot was invested in public spaces and it shows-the metro system designed by Foster (they call the station entrances Fosteritos), the riverside parks and new set of cultural centers make Bilbao one of the most livable cities weve seen. Here we visited 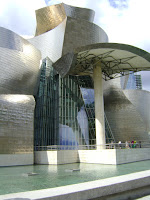 Calatrava's bridge, the new Health Dept. building with its fractured glass facade and, of course, Gehry's Guggenheim. For all the pictures I'd seen of the building, nothing could quite compare to the real thing. As much as I had set myself up to dislike the building, my mind was changed for me. The museum is very well integrated into its surroundings-thrusting into the river and wrapping the existing, but not so beautiful, bridge. The interior is laid out around a triple-height atrium space, around which are scattered exhibition rooms. On each floor, the circulation is such that you have to walk through exhibitions to continue on in the museum. It also fights museum fatigue by switching between gallery space and views of the atrium/city. And at every point, much like in the New York Guggenheim, you are always aware of the people around you. It's as if the people are on display as much as the art and the museum acts as another plaza, bringing people together to share a common experience.
My favorite exhibition space in the museum was by far the permanent collection by Richard Serra. In one long gallery are placed a series of life-sized, warped steel forms that from the outside just look like masses, but are actually curved steel planes. The room itself is designed just for these experiential sculptures. From first glance, t 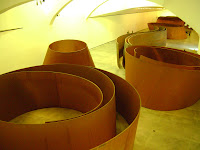 he sculptures stand alone in a blank white room, then as you walk through them, the planes warp and change, losing the room completely along with any sense of direction. The only thing orienting you in any way is the sound of many people that the massive room amplified manyfold. As you reach the core of the sculpture, the room reveals itself for what it truely is-the roof swooping with the curves of the sculptures.
We also happened to have arrived on the eve of a huge festival again, this one known as White Night. That night we saw a variety of perfomers, and I mean variety. One basically involved three guys beating the life out of a car...check out the video below.