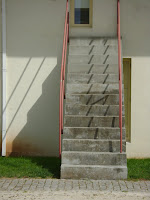 After meeting Begonia, Kate's friend from Spain at the station, we headed to a quick lunch under one of Porto's soaring bridges overlooking the river. On either side of this river, the hills of the city rise steeply, giving views of everything from the top. With class that day we visited a housing project by Siza, who is fabulous at creating very whimsical buildings-in this project for example, the handrails are shifted slightly off center making it look like someone made a mist 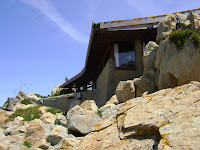 ake in the drawings. It was a Siza-filled day as our next stop was the atlantic coastline where Siza designed a set of pools and tea house fitted in among the rocky cliffs. The two projects were completely different-the pool house portion of the pool project was tucked away between the pedestrian walkway and beach while the tea house was set in jagged rocks, framing poscard picture views. We ate lunch at the bar next to bright blue waters and followed it with a climb to the top of the nearest rock pile. Our last stop of the day was Casa de Musica by Koolhaus-the cultural center of the city that houses one of the best shoebox theaters in the world and provides many musical workshops to all ages. The building itself is always open to the public an 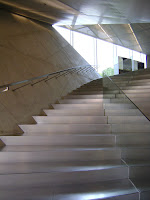 d the public is allowed to roam its rooms freely, making the building an extension of the plaza just outside. A few of us went to a concert there later that night and the sound was fantastic-I don't think I even knew completely what accordians sounded like until then.
The next morning was also Siza-filled. We visited his School of Architecture and I have to say it was one of my favorite things weve seen thus far. Siza's whimsy was at its best, giving the architecture students there plenty to discover in their five or so years there. Materials wrapped in clever ways and 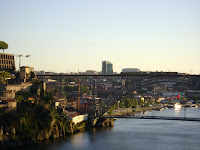 the geometry of the spaces created fantastic optical illusions like one ramp that appeared to be sloping, even when standing on it but was actually completely flat. While in Porto we also made time to go to a port wine tasting, have some home cooked meals of octopus rice (slightly spicy and delicious) and check out the giant world cup screen set up in the middle of a public plaza.
Posted by Angela at 3:03 PM