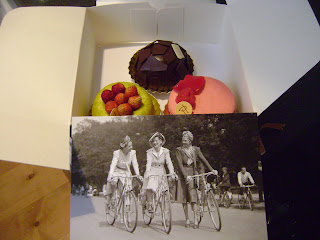 My first week in Paris has been exhausting, but satisfyingly so. Walking non-stop every day to see as much as possible can really take it out of you...Upon arrival, Gregory, a gregarious French man told us all about these amazing macarons made by Pierre Hermes and told us of the many places to visit in Paris. Upon arrival back at the apartment that day we found 3 of the very macarons with a note, "Parce qu'en parler c'est bien, mais en manger c'est mieux," or for non French speakers, "Because to speak of them is good, but to eat them is better." Well put. 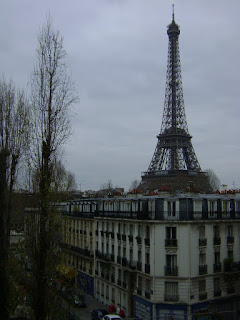 Exploring Paris the first few days, I was intrigued by the Passages or indoor/outdoor markets that run through buildings as well as the little courtyards just behind every door. It's like the city is whispering in your ear, playing little games, teasing you with its secrets. There are so many little nooks and crannies, little streets that go seemingly nowhere, but take you off the main street only to spit you right back out...it's impossible to see it all. I love too the lack of a grid system here, so that every time you turn a corner, you don't know what your view will be, sometimes it's a huge monument, sometimes a small courtyard, and sometimes the back of a building. One thing is for sure, Paris is a city of surprises. 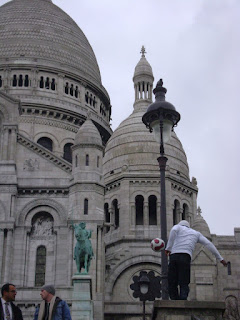 Luckily, being a student in Paris means you get access to any museum or attraction for free. So far we've visited Pompidou, where there was a huge collection of Modern Art and architecture, Cite which is a center for architecture through the ages, climbed to the top of the Arc de Triomphe and visited countless churches including Notre Dame and
Sacre Coeur. (Seen right is a man playing soccer at Sacre Coeur, or Soccer Coeur...) Pompidou was probably my favorite as a kind of experiment for social interaction and interaction with the city. It felt like much more than a museum: the slightly sloped plaza and fountain nearby were a constant hub of activity of people meeting, performing, etc. And the organization of circulation on the outside of the
building, weaving through the "innards of the building" (mechanical systems, plumbing, etc.) Was a fascinating way of moving in space.
Despite the controversy surrounding it when it was first built, it's easy
to see why this building has become an icon and beloved space of the
city, although I am sure there are those that would still disagree. 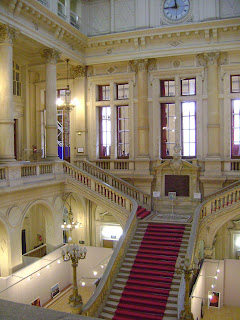 Our first assignment for class had us read Perec's attempt at exhausting a space and sent us out into the city to do the same. We picked spaces both traditional and nontraditional, indoor and outdoor, to sit and just observe and record exactly what we see. As an exercise, it helps us be more aware of our environment and got us to visit places we might not have. Among the places I went I observed a clown performing for kids in the Mayor's office of the 10th arrondisement (seen left), trains running every 3 minutes in the Metro, a man who worked in construction who came up and talked to us about architecture and the Pythagorean theorem, and lots and lots of scooters, bikes, buses, zipping every which way. 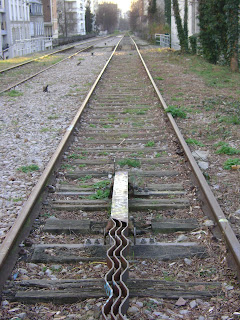 Today in class we took a walk along the Promenade Plantee, an elevated train line converted into park, the prequel to the High Line. This elevated train line intersects with another abandoned line, known as La Petite Ceinture, literally the little railway belt, only this one has not been converted into anything and is the site for our studio project this semester. We are challenged to come up with an urban plan for said train line which is 32 km long and then to take a piece of the urban plan and test it with an architectural intervention. Our first visit to the site was fascinating and not completely legal, but amazingly, in Paris, there aren't many people to shoo you away, or who care to. The abandoned rail line is beautiful in how it weaves through the city, cutting through some of people most personal spaces, sometimes lifting many feet off the ground, sometimes sinking 50 feet below. We only walked a portion of it but no doubt we will be seeing more of it as the studio progresses
.
Posted by Angela at 1:40 PM