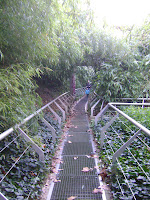 My second week in Paris led me to Parc de la Villette, home of architect Bernard Tschumi's architectural folies. However, perhaps my favorite part of the park was a bamboo park done by Alexandre Chemetoff that engulfed people in another, almost jurassic park-like environment. Also within the park was a small exhibit of films about cities, one of which, an animation by Esteban Azuela was a dynamic visualization of telephone poles that morph into birds and extend across cities. On Sunday we ran into the Bastille outdoor market-pretty much the only thing open on Sundays which was an array of every food you can find-there's multiple specialists for everything: roast chickens, oysters, and of course cheese just to name a few. Later that evening we took a quick ride on the bikes to the Architecture center in Paris where we found an extensive history of the architecture in Paris, as well as many architectural competitions in and around Paris. There was so much to see, well just have to make it back later. 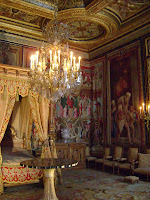 For a quick day trip, I went to Fontainebleau, a small town just outside of
Paris known for its Chateau or castle inhabited by many French kings as well as Napoleon. The interior of the castle was absolutely extravagant, much like a mini Versailles, and the gardens around it vast and sprawling, but not as manicured as Versailles' gardens for example. The town around the castle was very quaint, nestled among 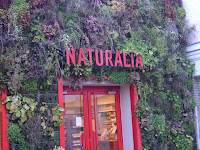 national forests, in which one of my favorite things I found was a green-walled natural foods store... 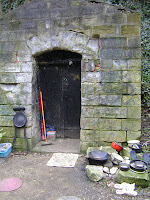 That wednesday we took another walk along the abandoned train line, La Petite Ceinture, this time on a portion that was sunk below street level. Funnily enough, on the same day was some sort of celebration of the train line and so an actual train was running on it, mind you, very slowly, so slowly that we just walked in front of it and it never caught up until the end. Our walk took us through a pretty long, dark tunnel, past abandoned station stops, as well as pieces of the train line that someone had converted to a home. Towards the end, the train caught up to us and many french photographers, who came to photograph the celebratory train, urged us to get off the tracks as the train was coming (!!)...and they were right...it was, at a whopping two miles an hour.
That same day, took a visit to the Hotel de Ville of Paris for a Sempe exhibit, a french cartoonist who did a lot of work for The New Yorker, that was an absolute joy. His social commentary has such a fun, light sense of humor, very reminiscent of Tati, the french filmmaker, who it turns out he was good friends with. That night, the three of us met up with some American expats to go to a comedy show, that was all in french, but due to its very exaggerated performance, was completely understandable in English. 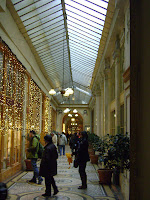 For class the next day we took a walk through the Parisian passages or indoor streets, some of which were absolutely gorgeous and all filled with shops for some of the most random and specific things, like one just for stamps and another just for designer canes. Some of my favorites though were the ethnic passages, like the middle eastern and indian ones, conveniently located right near our apartment...i will be going back.
On Friday we met some french people that studied at IIT for beer at perhaps the only french brewery called the frog, whose beer was nothing special, but decent. The next day two of the Parisians joined us for a walk through the French Catacombs, about 130 steps below ground where they deposited a lot of the bones of Parisians from the overflowing cemeteries in the 17th century. It was fairly creepy 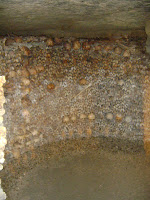 as it was just rows and rows of bones, placed very particularly creating a design out of skulls that someone had to design and lay out.
The last few days has been great for catching up with family and family friends. First, treated to a wonderful dinner at Raoul's place on Montmartre overlooking the Eiffel Tower and today spending the day with Carol and Mika, paying a second visit to the Sempe exhibit and dinner on the town. Tomorrow begins our traipse through Italy...au revoir Paris, a bientot!
Posted by Angela at 2:21 PM